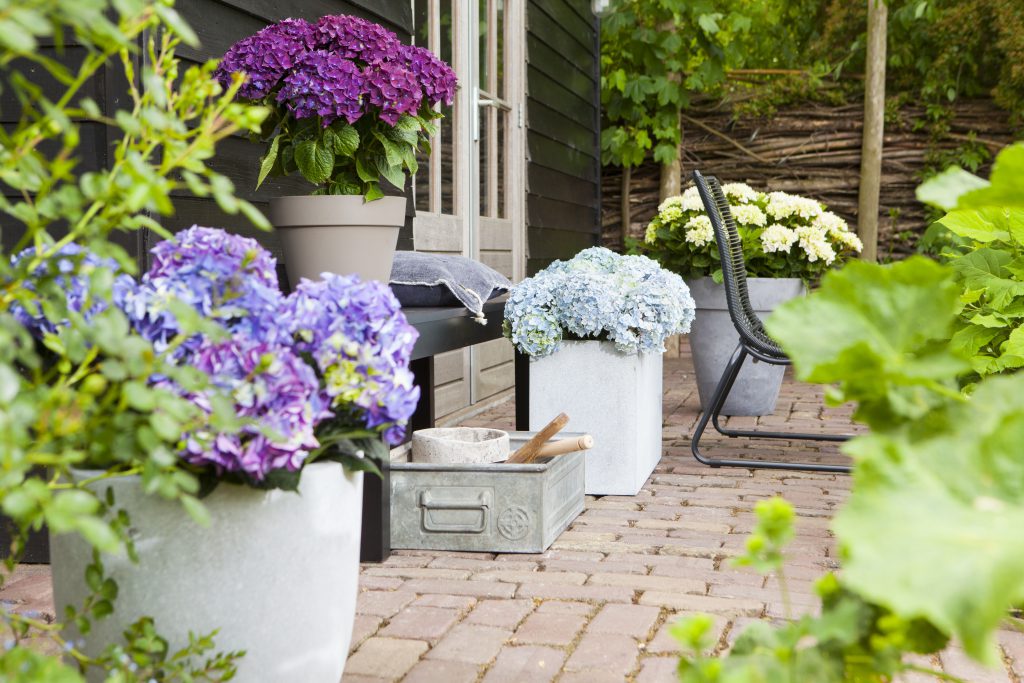 The well known pink, blue or white bulbs, plumes and bouquets blast out of front gardens; Hydrangea is a well-loved garden and pot plant, especially because of it tremendously abundant flowering. What’s more, Hydrangea is a trouble-free plant which brings beautiful colours to your garden.

Follow these tips to keep your garden Hydrangea looking good:

Select a spot in the semi shade. A spot in the sun will also do, but in that case reckon with ample watering in the summer months. White Hydrangeas do not thrive in the sun, its flowers turn brown.

Dig a hole two to three times bigger than the pot root ball. Throw ample potting soil or peat in the hole. Take the plant out of its old pot. Revitalize the roots by damaging it in a few spots. This will stimulate re-growth of roots. Take the Hydrangea. If the root ball feels a bit dry, put it in a bucket of water for a few minutes, it will saturate and so have a good start. Fill the hole with soil and press this firmly. After planting, water sufficiently. Repeat watering regularly, certainly closely after planting.

March is the best time to cut back your garden Hydrangea. Below you can read how to do this best. Hydrangeas can be divided into two groups, being flowering on old buds and flowering on new buds. Both require different ways of cutting back.

This group includes, amongst others, the Hydrangea macrophylla. This species flowers on the buds developed the previous year.

• Let the flowers stay on in autumn and winter. They will protect the hydrangea against frost.
• Cut the dead flowers from the branches in March. • When you cut a number of old branches down to the ground, the bush can regenerate.
• If you want to reduce the Hydrangea considerably, you can cut off half the branches one year and the other half the next year. The cut back stems will not bear flowers that year.
• Provide extra protection against late night frost for these species, so the buds will not freeze over.

The Annabelle (Hydrangea arborescens) and the Hydrangea paniculata are included in this group. These flower on the branches formed starting spring, and keep on flowering after being cut back. Hydrangea ‘Forever & Ever’ is the only Hydrangea macrophylla that can also be cut back this way.

You can cut back this Hydrangea early spring.

• You can cut the bush down to fifteen centimeters above the ground, for a nice compact plant.
• Do want the plant to be bigger, only cut off the flowers.
• Cutting back Hydrangea ‘Annabelle’ can always be done a bit more rigorously, resulting in beautiful big flowers
• The plants do not need to be cut back in autumn, because the old flowers protect the plant against frost.

Because a Hydrangea flowers so much, it also needs a lot of fertilizer. For this you can use organic, universal fertilizers. These fertilizers are not only beneficial to Hydrangeas, but can be used for your whole garden.

The best time to move the hydrangea is March/April. In these months Hydrangeas are still at rest and have the time to recover before growing again. Also, in that period there is little chance of damage by frost.

Hydrangeas do very well in pots but become rootbound after three years. Now you could just move the hydrangea to a larger pot with some potting compost and fertiliser. But if you want to keep the old pot, you can make the hydrangea smaller.

Most hydrangea varieties will not produce any flowers in the following year. Except for Annabelle and the Panicle hydrangea, which are guaranteed to shoot again with accompanying flowers.

Most important when caring for Hydrangea is probably watering. Hydrangea is derived from the Latin word ‘hydro’, which means water. Best is to water the hydrangea regularly, it will be at its prettiest and grow at its best. If you do forget and skip a turn of watering, the leaves may sag. In that case you will need to water the plant promptly, it will recover swiftly. The flowers however may show some brown discolouring.

Page load link
We use functional cookies. The collected data is anonymous. Third-party cookies (eg analytics,
advertisements, tracking and / or social media) may also collect data outside of this website. By
clicking on ’I agree‘ you consent tot he placing of these cookies when you visit our website.
Cookie settingsACCEPT
Manage consent

This website uses cookies to improve your experience while you navigate through the website. Out of these, the cookies that are categorized as necessary are stored on your browser as they are essential for the working of basic functionalities of the website. We also use third-party cookies that help us analyze and understand how you use this website. These cookies will be stored in your browser only with your consent. You also have the option to opt-out of these cookies. But opting out of some of these cookies may affect your browsing experience.
Necessary Always Enabled
Necessary cookies are absolutely essential for the website to function properly. This category only includes cookies that ensures basic functionalities and security features of the website. These cookies do not store any personal information.
Non-necessary
Any cookies that may not be particularly necessary for the website to function and is used specifically to collect user personal data via analytics, ads, other embedded contents are termed as non-necessary cookies. It is mandatory to procure user consent prior to running these cookies on your website.
SAVE & ACCEPT
Go to Top